"Unlike its land-based cousins, the 'Verge' bee thrives in water. While other species might avoid inclement weather (such as rain) this species will continue to be active."

The Verge Bee is a Tier 1 species found naturally in

in along the shores of Forests.

It's one of the first three species that players come across at the start of the game along with Common and Forest, and also the first bee encountered that is rain-loving. 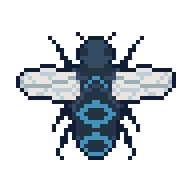 These are the different Traits that the Verge Bee can spawn with. 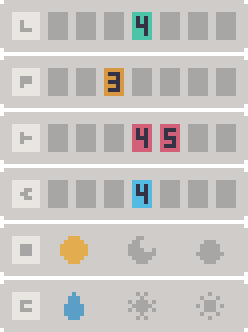 This species is rain-loving, and will work while it's raining.

Although the Verge Bee is found naturally and already 'discovered' when the player starts the game, there is a hint listed in the game files:

This species is drawn to shallow water and nests on the shores.

As this species isn't found by cross-breeding, Beenjamin doesn't give any hints for it.

When a Verge Bee is used in an Apiary and fills Frames, they can produce

When Cross-Breeding the Verge Bee with the following other species there is a chance for the offspring to mutate into a new species!

Retrieved from "https://wiki.apico.buzz/w/index.php?title=Verge_Bee&oldid=1047"
Cookies help us deliver our services. By using our services, you agree to our use of cookies.