"While some radical scholars have proposed they burn honey for warmth - in a similar manner as Apis Lumen - field observations indicate they maintain optimal ambient temperature by the sheer volume of their industry."

The Fiery Bee is a Tier 3 species found in

This bee is unique in the fact that while technically a Temperate bee, it will work in polar climates. 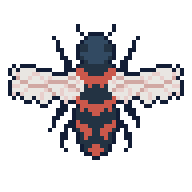 These are the different Traits that the Fiery Bee can spawn with. 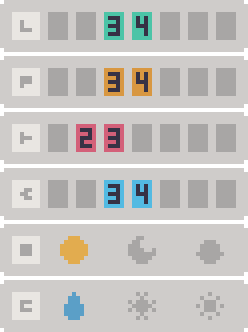 The Apiarist's Almanac gives the following hint:
Found in colder climates, this species generates a lot of energy through activity to heat their hive..

When asking Dr Beenjamin BhD for a hint he says the following:
apis Ignis? Tell me, my least favourite pupil, how would you find hot rocks in snow? Ugh, yes, correct - go find the 'melty bits'.

When a Fiery Bee is used in a Basic Apiary and fills Frames, they can produce

When Cross-Breeding the Fiery Bee with the following other species there is a chance for the offspring to mutate into a new species!

Retrieved from "https://wiki.apico.buzz/w/index.php?title=Fiery_Bee&oldid=2318"
Cookies help us deliver our services. By using our services, you agree to our use of cookies.